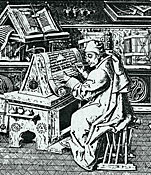 When were educational handwriting methods established? Human handwriting itself had to evolve, and society at large needed to adopt handwriting as a common practice, rather than leaving it almost exclusively to scribes.

When Gutenberg created his movable type press in the mid-1400’s, he modeled his letters upon the writing style of the scribes at the time. As the technology advanced, more upright letters were designed for printing. Several others designed similar upright, or Roman style, type faces. Then in the late 1500’s, Robert Granjon designed type faces that more closely resembled script writing, and these became quite popular.

The development of copperplate engraving allowed for the use of very delicate type faces with many flourishes and curlicues in the script-like letters, which greatly influenced handwriting. Handwriting masters began to grow in number to produce beautifully written documents. Elegant handwriting became a sign of social status.

By the mid-1700’s, there were special schools established to teach handwriting methods, or penmanship. Master penmen, or engrossers, were employed to copy official documents such as land deeds, birth and marriage certificates, military commissions, and other legal documents. Timothy Matlack was commissioned to engross the final copy of the Declaration of Independence. Jacob Shallus engrossed the final copy of the Constitution of the United States of America.

In the late 1800’s, Charles Zaner founded the Zanerian College of Penmanship, and later sold part interest to Elmer Bloser. Together, they founded the Zaner-Bloser® Company, and created materials to be used in teaching good penmanship as part of a general education. In 1904, they published the Zaner Method of Arm Movement, developed especially for elementary-aged children. The upright style of the printed letters helps children learn to read and write more quickly, since that style matches most children’s books. Zaner-Bloser® remains one of the main handwriting methods taught to children in the U.S. to this day.

A newer method of teaching penmanship was developed in the mid-1970’s by Donald Neal Thurber, and was introduced in 1978 as D’Nealian® Handwriting. It uses slanted letters to teach printing, in order for children to transition more easily to cursive writing. The slanted style of the printed letters helps reduce issues with dyslexia. This has also become a popular method taught in U.S. schools. You can read more about the advantages of D’Nealian® Handwriting.

Learn more about the History of Handwriting.

Your cart is empty.